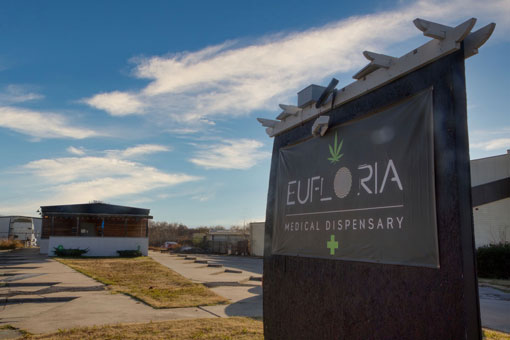 TULSA, Okla. (KTUL) — Dispensaries across the state have become a target for break-ins. They are cash-only businesses with potentially high-dollar marijuana inside.

Last week, a 24-hour dispensary opened right here in Tulsa, and the owners say the risk is worth the wait.

The store sits on the east side of Tulsa near 11th and Garnett in an area littered with vacant buildings, an area known for its crime.

“Although it was rough in the beginning as far as security, it has paid off,” Eric Dangler, the CEO of Eufloria Dispensary, said.

The store is open 24 hours a day, seven days a week, which isn’t typical for most dispensaries and could even be looked at as dangerous, but the owners aren’t worried.

“With any business, you could possibly have someone come in and interfere with your business,” Borgmann, the Chief Operations Manager for the dispensary said.

Borgmann says they are more than prepared to ward off potential crime.

“Without detailing what we do with security, I will say security is staunch,” he said.

There are some noticeable items, cameras are in place, a security vault is mounted and secured by a level eight banking window and the owners are no stranger to protection.

“Eric, David, and I have a security background in the military, and we designed this place with our knowledge, and we have interfaced really well with the local police department,” Borgmann said, while also allowing shoppers their Second Amendment rights.

“If you are lawfully intending to protect yourself and maybe someone else, you don’t have to leave your gun in your car,” he said.

Above it all, the owners say giving others relief outweighs the risk, no matter what time it is.

“We are out there for the Uber drivers, Lyft drivers, bartenders, the musicians, people who have to work until everything else is closed and get that relief,” Borgmann said, whether it’s safety or health-related.

“We are actually changing the way that the industry has been perceived over the years,” Dangler said.

Dangler says their number one priority is the patient.

The owners say they built the store with all ages in mind. They created a retail shop upfront with medical marijuana in the back.

“We are not glorifying the pot culture, we are trying to embody the actual medicinal cannabis,” Borgmann said.

If you’re interested in this story, we encourage you to visit one of our locations. For media inquiries, please contact marketing@eufloriameds.com

The founders of Eufloria, are retail entrepreneurs and combat veterans. They understand the cannabis industry has changed. Consumers are demanding guidance and education on the products they buy as well as a safe, clean and friendly atmosphere to enjoy while making their purchase. We welcome everyone as part of our Eufloria Family!

After many months of research, hard work, and planning, the founders recognized that a revitalization of CBD, medical, and recreational dispensaries was needed. That’s why Eufloria created a new cannabis experience offering clients a safer, cleaner, more welcoming and education-based environment to shop; elevating the marketplace to match the sophistication of today’s cannabis consumer.